BVI RACING – To introduce our new racing column, we caught up with Emma Paul of Royal BVI Yacht Club anticipating this year’s racing calendar.  Emma guides us through who to watch, and the results will tell the tale.  Preparation, training and equipment are one element of racing. The other is the team in practice, local knowledge, confidence and dominance.  We’ll look at how weather sets the arena, and after many post event discussions in the bar, what is left to ponder once the results are in. 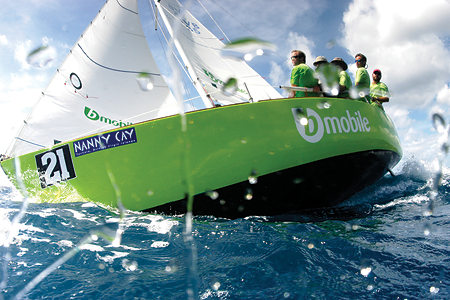 Photo by Armando Jenik – Team bMobile race for a first-place finish on the last race of the regatta.  They didn't win overall, but what a way to end the regatta after fixing a broken spreader and missing 3 races

The bMobile BVI schools regatta has historically been won by Cedar School but this year there should be a strong showing from St.Georges Primary and Secondary, BVI High School and the Sea Cows Bay 7th day Adventist School.  Sailors compete individually with points going to their school's overall win and the school with the least points wins. The regatta is meant as a fun day to get as many out on the water as soon as possible.

The Nanny Cay Nations Cup is organised by the RBVIYC and RIP (Racing in Paradise).  Teams get behind their flags and sail against one another to be the top nation.  The BVI teams have dominated this event due to the talent of the Hirst Brothers, Robert and Michael.  Close behind is the young contender, the Yacht Guide’s very own Colin Rathbun, heading up the bMobile sailing team also racing for the BVI.  Go BVI!  This year the British or Canadian teams will be lobbying for pole positions with top sailors Andrew Waters and Kevin Wrigley spearheading campaigns.

The Pussers Round Tortola Race is one of the oldest races organised by the Royal BVI Yacht Club.  This year will mark the 38th event. It is also the most infamous on the island due to local sailor Robin Tattersall once opting for a shortcut under the Queen Elizabeth Bridge.  He previously arranged for it to be raised so he could sail underneath effectively compassing Tortola. Unfortunately the bridge got stuck and caused a headache for a couple of days!  Since then the race instructions have stipulated Beef Island to port to ensure you sail the whole way round!   Due to the vastly different types of boats that enter scoring is on handicap (a rating system measured against time and distance).   For those of you not familiar with the system, this often means that the winner across the finish line is not necessarily the winner of the race.

Last year’s winners were Milt Baehr on Igoodia in the Racing Class and Bill Bailey on Second Nature in the Cruising Class.  You can follow the boats' progress as they sail from many spots around Tortola. The race starts and finishes off Nanny Cay for the racing class. The cruising class start in the same spot but finish at Soper's Hole.

So, cutting edges to look for:  Guy Eldridge on his new Beneteau and Christopher Lloyd on Three Harkoms.  Look for the fast and the furious with Richard Woolridge on Triple Jack and Pat Nolan on Boomerang.   And if you want to get into yacht racing come by the Royal BVI Yacht Club in Road Town, or at the southern end of Nanny Cay and jump on an IC24 for beercan racing.

And if that's not enough, check out the forum on www.IC24.org for more weekly beercan racing action right off the southern end of Nanny Cay.   IC24s, pictured above, are the new fad in racing and fast spreading to the rest of the Caribbean and North America.