The last leg of the last race decides the 2007 NCNC –  It's hard to imagine how it could have been closer.  The 20th and final race of the weekend saw bMobile Team BVI two points behind Team Holmberg BEYC.  The BVI team needed to finish the final race with two boats between them for a tie or three for a win.  This was not very likely with the super consistent Holmbergs scoring nothing worse than a third so far… 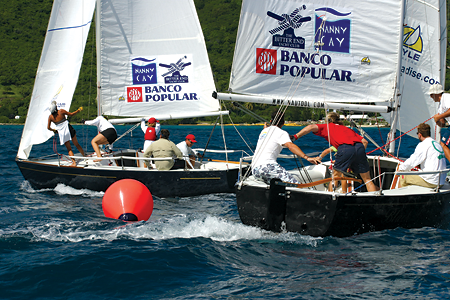 So what it boils down to is this.  If the BVI win the final race Holmberg has to come 5th (and last!) for the BVI to win.  If the BVI place 2nd and the Holmberg’s last it will be all tied up.

Race 19 saw the Holmbergs looking shaky for the first time. They rounded the first windward gate last and only managed to get past Annapolis and the Dutch to place third. Meanwhile the BVI could not get past the Canadians who won the race.

Conditions could not be more perfect.  There's a little more wind than Saturday but very little wave action.  The mark boat has not had to adjust the course once all day, the sun is out, and the course is set right off the beach. Six teams are ashore watching the final race unfold; no one really thinks the BVI has a chance.  The Dutch had already missed out on catching Andrew Water's 'Blighty's' with their 4th in race 19, the Canadians, even with another bullet cannot poach third place either. All eyes are on young Alec Anderson helming for the BVI.

The start went very badly for the Holmbergs and crew.  They end up taking transoms and tack out into the channel.

The Canadians are on fire and they round first with the BVI in hot pursuit. Incredibly the Holmbergs round the windward gate in last place by several boat lengths.  It's a two round race but the Holmbergs cannot close up on the run, rounding the leeward gate still firmly in last place.  The final run sees the BVI desperately chasing the Canadians.  The Holmbergs are rooted in last place, USA Dotty Holoubek sailing 'Black Pearl' and the Dutch in 'MIO' do not lose any ground to the Holmberg’s.
The Canadians defend their lead and take the race, the BVI score 2 and the Holmbergs score 5. Back on shore the points are double checked, the two teams are locked together on 18 points. In the event of a tie it's the number of bullets that decides the outcome. After sailing 10 races over the weekend the BVI has 5 bullets but the Holmbergs have 6. Team Holmberg representing the Bitter End Yacht Club and the USVI take the 2007 NCNC.

It's been a great weekend and the lower than expected turnout did not dampen the event at all. The Holmbergs, namely; John, wife Dianne, son Kai (age 8), Brother Peter and his wife Denise gracefully accepted the fine half hull trophy and the perpetual award. Congratulations to them, it was a pleasure to have them racing here together and it has to be said, they are true ambassadors to the sport of sailing.

And if that's not enough, check out the forum on www.IC24.org for more weekly beercan racing action right off the southern end of Nanny Cay.   IC24s, pictured above, are the new fad in racing and fast spreading to the rest of the Caribbean and North America.