Do you know the way to Cane Garden Bay? – BVI MUSIC FEST 07 – From the 25th to 28th May 2007, anchorage at Cane Garden Bay will be at a premium. Hundreds of boats, from dinky to dinghy to motor yacht to mega yacht, lured there by the vibes and reverberations of music and nature will be competing for front row positions in the Bay’s placid waters.

For the dates herald the 7th Annual BVI Music Festival, a veritable feast of live music, culture, food and frivolity all wrapped up in one fantastic atmosphere.  If you fancy a gig or two while on your sailing vacation, head on down to the Bay to catch a raft of famed and international artists live and kickin’ on the beautiful white sand beach. 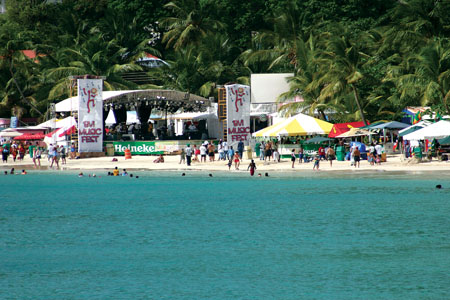 The BVI Music Festival was born out of a need to bridge the gap in the events calendar between the BVI Spring Regatta and the August Emancipation Festival with something that would satisfy both the local and tourist markets in terms of entertainment, in effect bringing the two together.  “It’s a multicultural unification through the common language of music,” says Frank Mahoney, Founder and Chairman of the BVI Music Fest Committee. “It’s four days of international Calypso, Reggae, Rhythm & Blues, Jazz, Zook and a diverse gamut of other styles; and it’s a fantastic opportunity for our top local artists to perform for a huge, international audience.  We started with the support of Cable and Wireless seven years ago and it has grown from there.  Seven years on, Cable and Wireless still have faith in it – their cellular operations, bMobile have promised a further five years of funding to ensure the Festival continues to rock the BVI.”

Over the years, the BVI Music Festival, with the help of its sponsors, has attracted some really big name artists.  Jonathan Butler, the Manhattans, Jimmy Cliff, Gregory Isaacs and Roberta Flack, to name a few, have all graced the stage on that stands on the dazzling sands of Cane Garden Bay beach.  This year’s line up of international artists is no less astounding, promising Percy Sledge, Wycliff Jean, Alison Hinds and Freddie Jackson amongst twenty plus performers slated over the four days.

http://www.bvimusicfest.net for a full run down and all the fun of the fringe.

In between gigs, revellers can indulge in a bit of light whimsy and join in the shore-side competitions ranging from sandcastles to beach volleyball, or simply lime under the palms with a drink, friends and some fabulous food from any of the popular beachside vendors.  It’s four jam-packed days and those moorings get pretty full up, too, so don’t forget to get there early if you want to secure a front row spot for your sunset watch complete with soundtrack.