MUCH TO CELEBRATE – “Fourteen?  Fourteen! My, you have a lot of holidays!” are words that come out of many a jealous friend’s mouth.  “Sun, sea, sand, beautiful islands, beautiful people, a beautiful life and fourteen public holidays.  Well, don’t you have it easy?” 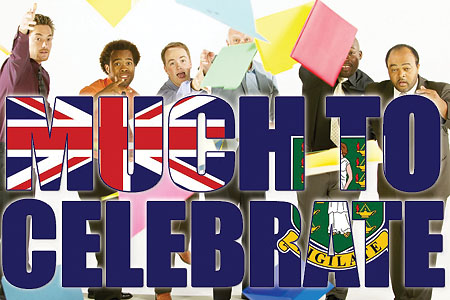 We don’t have it easy, really.  Yes, the BVI is a very beautiful place but we work very hard, too.  Of those fourteen public holidays, New Year’s Day, Good Friday, Easter Monday, Whitsun, Christmas Day and Boxing Day are observed throughout the Christian world so in reality, we have eight public holidays.  And we have just cause to celebrate on each of them.

Did you know?
H Lavity Stoutt’s Birthday is celebrated on the Monday closest to 7th March. This year, it falls on March 5th.  H Lavity Stoutt was one of the BVI’s greatest leaders, the first Chief Minister to be appointed upon the introduction of the Ministerial system of the BVI Government.  He was elected to the Legislative Council in 1957 and was re-elected every subsequent election until his death in May 1995.  He served four terms as Chief Minister.

Commonwealth Day is celebrated on the second Monday in March.  It is a day to remember and honour the modern Commonwealth of Nations, of which the BVI is one of 53 members.  It is an international partnership of countries dedicated to co-operation and governed by mutual respect.  Governments, Commonwealth organisations and schools participate in events to pay tribute to this special partnership of nations and peoples and the ideals they hold in common.

The Sovereign’s Birthday is celebrated on Saturday the 9th June in 2007.  Her Majesty Queen Elizabeth II is the BVI Head of State.

Territory Day, observed on 2nd July this year, originates from 1956 and celebrates the dissolution of the Federation of the Leeward Islands, created in 1872. The dissolution led to the creation of the ‘Colony’ of the Virgin Islands brought into existence on 1st July 1956.  In the 60s, the term ‘Colony’ became obsolete, and the word ‘Territory’ was adopted.

Festival Monday, Tuesday and Wednesday are always celebrated on consecutive days in August – this year, 6th – 9th August.  And the celebration, of course, is the emancipation from slavery in 1834.

St. Ursula’s Day, on 22nd October, became a public holiday in the BVI in 1957.  It commemorates the abandoned Catholic feast day of the British Christian saint and martyr, Ursula (born sometime in the year 2AD), who purportedly travelled to the Holy Land accompanied by 11,000 virginal followers of her new faith only to be slaughtered by Huns on her return journey.  According to legend, Christopher Columbus, who discovered these verdant isles on his second journey in1493, named the whole archipelago after her. Ursula is depicted on the BVI Flag.