BUYING THE DREAM BOAT – As a magazine focused on the yacht sales industry, we often look at the market through the eyes of those who sell boats.  This article is the first in a series of discussions with their customers, the boat buyers: their experiences, insights, and conclusions. This month we meet a newly retired sailor who spent many years travelling in the oil and gas industry and is now ready to enjoy some hard-earned leisure time.

Kerry Upperton, a British-born Canadian, has sailed BVI waters for twenty years or more, mostly on two-week charters with his family and friends. As retirement approached, Kerry decided that whenever he was able to take several months a year to go sailing, he would consider buying his own boat. For a month or less, it made sense to charter; otherwise, ownership was the way to go. Then the question is, what sort of boat? “You can try to get a boat to do everything,” Kerry told the VIYG. “Cross oceans, travel round the islands, but that’s difficult.”

Having focused on sailing the islands, he wanted a boat that could fit his family: wife, three daughters and their boyfriends, plus assorted personal friends (though not necessarily all at once). Another factor was the ability to sail solo—too much boat would make that difficult. He started looking for a 40-45 foot sloop. He likes catamarans, he says, but prefers a sloop for its sailing characteristics.

THE SEARCH
Starting his search via the Internet, Kerry made his first offer last February, on a boat he found on a U.S. Government auction site. Sailboats are rare on U.S. Government auctions and this boat was bigger than he had been thinking about, but he made a low offer anyway, which was unsuccessful. He was pleasantly surprised to find how helpful people were. He contacted local marinas (the boat was in St. Croix) for background information and hints as to its condition. “I’ve found all the way through everything I’ve done,” he said, “most of the time people are great with insights and information.”

Kerry next contacted brokers in the BVI, who presented him with several choices to consider within his $125,000 budget. “I had a list of things I’d like to see on the boat,” Kerry told us. “Air conditioning you could plug into on the dock would be great, but I didn’t care about a gen set.” The broker helped him settle on two boats. He flew down to the BVI and made a conditional offer on a Hunter 46, subject to a survey and a sea trial. “It was a good deal,” he said, “but it just didn’t feel right. On the sea trial, I found that with the nav. station halfway between the helm and the mast, I couldn’t read the instruments. I’m getting older and my eyesight’s not what it was. Silly little stuff, but that isn’t something you could easily fix.” Having decided that the boat wasn’t quite right, he walked away from the deal. 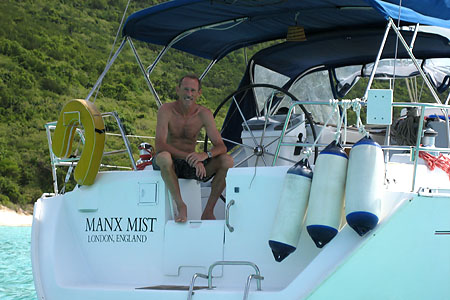 NARROWING THE CHOICE
Because he was down here anyway, Kerry started to walk around the docks and talk to people. He decided to visit the Moorings, because “every year they’re turning over quality boats. They’re five years old, which is right in the middle of my range, and they do such a good job putting the boats into as new a condition as they can after five years of service.” Faced with a considerable choice, he returned to Canada to consider his options, booked a charter holiday and came back to the BVI a little later.

At the end of his charter he booked a few more days on the type of boat he’d decided on, a Moorings 403. “All the features I wanted were in the boat and the whole package just seemed right,” Kerry says. “There are lots of advantages in dealing with a charter company. You can charter your preferred type of boat and really check it out—some of the companies will actually waive the charter fee as part of the purchase price. The Moorings were tremendous to deal with. After we closed, if I found anything that needed looking at, they worked on it and it was all sorted. A very smooth process altogether.”

SAILING AMBITIONS
Speaking of his sailing ambitions, Kerry made it clear that, as much as he loves the BVI, he hopes to venture further afield. “The BVI’s really such an easy place to sail that you can get lulled into a false sense of security,” he said. “There’s no tide to speak of, you do all your sailing in daylight hours, it’s all line of sight navigation. It’s really another world when you get to rougher waters, with big tides and currents. I’ve sailed England, the Channel, the  French coast—the Channel Islands, one of the toughest places I’ve ever sailed. It’s got a 20-foot tide and, when it changes, the tide race is 8-10 knots. You have to time your passage. It’s a different level of skill—navigation, tide tables, reading charts. So you come down to the BVI and think you’re a good sailor and you can handle a boat, but it’s really Sunday driving when you compare it to some other places.”

When asked if there was anything he would have done differently, Kerry thought about his answer. “I didn’t rush through it,” he said. “I started to think about it a year ahead of time and played around with the Internet a bit. Then I got serious six months later and spent a bit of money on trips down here and had a survey. To be honest, I’d love not to have made the first trip and the survey, which were a couple of thousand dollars cost, but the lesson is: don’t buy something you’re not sure of, even if you’ve spent some money. Just walk away.”

THE MOORINGS 403
The boat that Kerry Upperton ultimately chose, the Moorings 403, has established itself as a favourite in charter fleets worldwide. Marketed by Beneteau as the 393, it entered the Moorings fleet as the 403 (the last digit signifying the number of cabins in the yacht) and has been adopted by many other charter operators as well.

With an overall length of 39’4” and a waterline of 35’, the 393 is definitely a contemporary design. Yet Robert Perry, the naval architect, said of this model that “Beneteau has found there are still sailors who want boats that actually look like boats.” By which he meant that while the design numbers were very modern, the profile was quite conventional and played to the demand for classic looks and performance.

The confusion of model numbers is compounded by the fact that Beneteau have produced a bewildering array of yachts with their own model numbers which are then modified by the charter companies to distinguish their specific versions. Marketed as Beneteau’s answer to the “long awaited quest for the serious bluewater cruiser”, the 393 came with a shoal draught of 5’1” and the optional deep water keel of 6’3” draught. Displacement, at 17,000 lbs, is moderate.

A quick Web search for currently available models unearthed five Beneteau 393s on the Moorings brokerage Web site (which the Moorings confusingly describe as 391s in their listings but as 393/403s in the individual descriptions). These range from $111,000 to $139,000. Go to: www.moorings.com/Brokerage.aspx

The Sunsail site shows five 393s, ranging in price from $112,000 to $129,000, and scattered all over the globe. Go to: www.sunsail.com/yacht_ownership/brokerage/brokerage_list

Still in production at the Beneteau facility in Marion, SC, the 393 gathered a lot of attention at her introduction in 2001. Produced in several versions—a 2 or 3 cabin option was available as was a choice between furling or “classic” mainsails—the yacht shared many of the characteristics of her inspiration, the Beneteau 473, another Groupe Finot design which was named Cruising World’s Best Production Cruiser that same year.

One of the Moorings-badged version’s most popular features is the air conditioning that, while it runs only on shore power, is a powerful asset in tropic climes. Easily handled by a solo sailor or with a crew of up to six, the Beneteau 393 is a very forgiving yacht to sail and is very comfortable at the dock. While Kerry Upperton thought that he’d not want to head across an ocean in his 403, he’ll find it a perfect vessel for crossing the Caribbean or making the trip back to Canada, if ever he gets nostalgic for snow.