Home >> BUYING IN THE BVI

BUYING IN THE BVI

PATIENCE AND PERSISTENCE PAY OFF – Richard Hannah has had an eclectic career—clothing entrepreneur, counselor, charter operator—and in 2005 he decided to relocate from the wintry north to the BVI. His intention was to conduct a charter business, Reflections Sailing Charters, while kicking back and enjoying life. Richard is a fairly relaxed individual, so his attempts to find the appropriate boat for himself and his charter business were hardly a high-pressure affair. He poked around the boat yards and asked a few people he met if they’d heard of a suitable boat. He wasn’t flush with cash but he had a few dollars to spend and didn’t want to waste them. 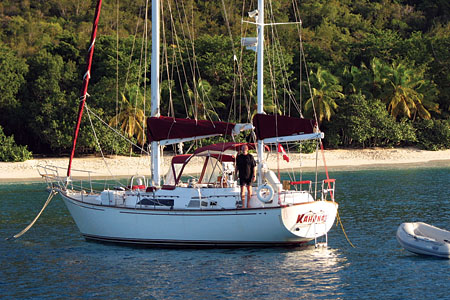 “I really hadn’t planned on buying a boat when I did. I already had my trade licence,” Rick told me recently, “and I was just kind of looking in between charters. Looking turned into a real interest in a boat that I’d found. It was in my price range but I knew that there were going to be a lot of upgrades that needed to be done.” He was lucky to have met a couple of local guys who worked in the maintenance and mechanical areas on charter boats and who encouraged him to pursue it.

The boat he’d become interested in was a 1982 C+C Landfall centre-cockpit 43-foot ketch which he’d heard about from BVI Yacht Sales in Nanny Cay. “I’d been dreaming about a boat while I was still up in Canada,” Rick told me, “and I’d see a boat and think ‘that’s in my price range,’ and I’d enquired on a few boats before with the same company, but never really done anything about it. I went back to them when I started looking at boats down here. I had a friend, Eddy, who knew a lot about rigging and hulls and whatnot, and when we found this one we thought it might be worth looking at.”

Things didn’t go easily. “It was a long process, a patient process,” he said, “because we were up in Canada at the time. Luckily I had Eddy here as a contact who knew more about boats in the Caribbean than I did. I was 4,000 miles away and I knew freshwater boats up there in Manitoba, but nothing about saltwater boats.”

The process of finding the boat and completing the purchase required much persistence. The boat was owned by several partners who had come close to selling once before but had pulled back at the last minute. “When you find a boat that’s really, really well priced,” Rick said, “there’s a reason for it. This boat was very well priced but it took a lot of patience because of all the negotiation with the three partners. The broker was great and wouldn’t let us buy the boat until everything was resolved. Here the owners were living in different parts of the world. We thought it was a done deal but there were some things the owners didn’t agree on among themselves. So we didn’t know it was going to work out until the very last day. The boat was sold once and they backed out and we didn’t know if that was going to happen again.”

The boat had been sitting for a year and a half on the hard and a lot of the systems needed repair. The generator, electrical wiring, the hydraulic steering, refrigeration, windlass, all needed attention. The engine and generator had been replaced in 2000 so were in reasonably good condition. “We got in the water and started it up,” Rick said. “We put the transmission into reverse and the dock guy was letting go of the last line, he still had it in his hand, and my friend realised the hydraulic steering wasn’t working so he yelled ‘Pull us back in’. We were right in the marina and we had to stay there another three hours to fix the steering.”

“It’s a lot of work, but it’s fun work,” he said. “It was a real battle for a couple of months, bringing it up to par and not really noticing much of the beauty or what we were doing. I was lucky to have Eddy and Gary, who know so much about boats, to help me. Getting rid of all the dirt and making it yours. Then it becomes the dream again. It goes from a dream to reality then back to the dream again. Twenty-five years ago when I started sailing up in Canada this was a dream of mine. Now the boat’s fixed, it’s clean and the only dirt is my dirt.

A boat becomes a part of you, a big part of you. I thank this boat every time it gets me somewhere, even to St. Thomas. It’s like my dog. Does that make sense?  Man’s best friend.”