The Man behind the Eyes – It’s not unusual to meet entrepreneurs in the BVI.  We often come across colourful characters that love the islands and after years of towing the line they tend to come across new ideas to benefit the community.   Steve Roose is an expatriate Londoner, a long time sailor who made the change from a fast living media-market to the paradise life of BVI.  Never losing sight of his goals, Steve settled in the BVI, committed to property, and celebrated the birth of his son Kyle with his long term partner Jen. 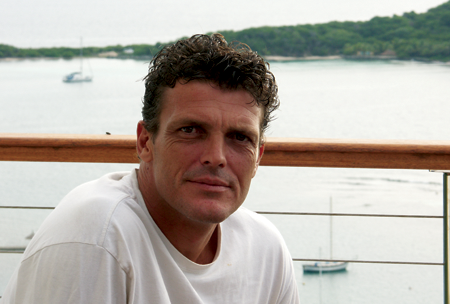 Having committed himself to the BVI, Roose is now committing to a new business – the yachting security business.   He’s not installing video cams and laser beams, but he is hiding tracking devices in boats.  Steve Roose is Boat Eyes, which installs modern day satellite tracking systems that monitor moving assets while complementing a private yacht management programme.

Often the papers remind us that this comfort bubble we live in is still prone to outrageous acts of misappropriation.   Although still an easy going territory, some new small measures of security may fend off other potentially disastrous scenarios.
A small undetected transceiver becomes the black box of the boat.  Via satellite and internet feed, the Purple Finder taps into all required information for tracking an asset.  Looking at the track in action on the net the device gives us a sense of Big Brother, in a comforting way.  Information such as the boat’s wind, speed and battery power is now constantly monitored.

Using satellite and internet viewable maps to pinpoint the exact worldwide location of your vessel, the system supports a “geo fence” boundary.  This is particularly useful for receiving notification of a vessel crossing a national or other preset boundary, a piece of mind service that’s incredible for its relative cost.  The preset boundary can be set to anything and as soon as the vessel leaves its designated area, the alarms go off at Boat Eyes will then in turn notify you or the designated authorities.

Working within the charter companies of  Tortola, Roose recalls what turned him onto his product, the Purple Finder.  Having trialed the system for 2 years on many boats and fleets throughout the Caribbean, Roose was checking on the progress of a yacht delivery.   Here the charter company was able to contact its 40 foot yacht while crossing the Atlantic and help its distressed crew navigate around two hurricanes.  With Polestar tracking and the assistance of the US coastguard, a container ship was able to call via VHF the now alarmed crew.  Spirits were lifted onboard when valuable weather information was given to the crew enabling them to set sail again.  With an exact safe course avoiding bad weather they made it to the Annapolis Boat show.  The show must go on!

In another instance, a BVI charter company raised a concern to Purple Finder when they became suspicious of their charter guests.  The company monitored their progress closely online the following morning, and found the yacht and crew had sailed outside of a clearly defined geo fence.  Having established that International Boundaries and Local Charter Rules had been infringed upon, the relevant authorities were informed.  Purple Finder was instructed to increase surveillance, and report on the yacht's position every 10 minutes.  Speed and direction were relayed via internet to the relevant authorities in the C-map format and the vessel was escorted out of Puerto Rican waters and later released unscathed back to the charter company.  The misappropriated vessel returned on its scheduled day for turnaround and went out on its next scheduled charter without any inconvenience to the company or its next guests.

Roose and his family are active on the waters of the BVI which they describe as “The sailing Mecca of the world, soon to be the safety Mecca of the world.”  It’s nice to know that there’s a good-hearted big brother watching out.