THE BVI'S NEW LIFEGUARD POLICY – As the BVI as a holiday destination grows in popularity, our beaches are filling with more and more swimmers, surfers, paddlers and snorkellers.  There’s nothing quite like gleaming white sands, azure waters and a beating sun to entice even the most stoic landlubber to get wet. However, you enter those crystal clear seas at your peril.  Even the more frequently used beaches carry large signs warning of ground swell, rip tides and strong currents; and these dangers are most notable in the winter – our busy season.  Sadly, these signs are ignored – the sunshine and holiday mode perhaps rendering them invisible – and on the most dangerous days people still venture in.  The result?  Accidents aplenty, and several of them fatal.   We’re just halfway through 2007 and already we’ve seen a record number of accidents.  What’s missing?  Until now, a lifeguard to verbalise the warnings and ultimately prevent further accidents. 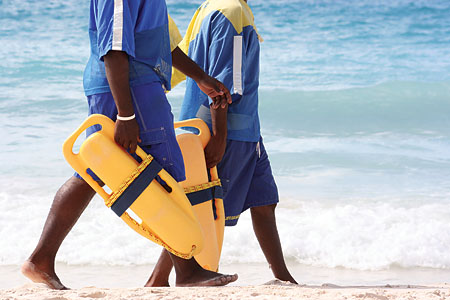 “Each beach takes one life a year; we need life guards,” says Naiomi, owner and manager of the Grape Tree Bar at Josiah’s Bay, Tortola’s most accessible swimming and surf spot. We’re watching swimmers go into the left hand side by the backwash and kids playing on the right in the rip.  These rips move very fast and losing footing means being carried out into the current and then being pounded by surf.  It will be a fight or flight mechanism and knowledge is power – without the necessary survival skills or trained lifeguard there is a statistic waiting to happen.

If ever there was a case for placing lifeguards on every BVI beach, the 2007 statistics have to be it.  So far there have been fatalities at every swimming beach on Tortola’s North Shore and Virgin Gorda.  Each time the beach was packed.   A concerted effort must be made to make our visitors aware of the dangers, an effort that should be reasserted locally, often.

Mark Street heads up and initiates the BVI lifeguarding project, funded through the Government of the BVI.   After several months of negotiations and assessment, the project is ready to launch.  The first step is to put lifeguards on the swimming beaches; the second is to implement a danger awareness programme and to start a junior lifesaving programme for BVI youngsters.  A wealth of brand new equipment, including paddleboards, rescue slings, response set ups and towers, is ready and waiting for the new scheme to initiate, and there are a number of swimming trials proposed to recruit BVI-based lifeguards.   The initial plan is to man the Baths, Cane Garden Bay, Josiah’s and Lambert Beach as they are highlighted as trouble spots.    As more life guards are recruited, more beaches will be demarcated for the scheme.

Until then, we’ll continue to ask swimmers to be vigilant. As most of us water users well know, the ocean shows no mercy and lack of respect for its tenacity will prove us wrong every time.