More than just sand – Believe it or not, there are over 150 “sandy” beaches in the BVI where one can sit, soak up the rays and drink rum punch. There are another 100 or so “gravelly” beaches made up of volcanic cobble and coral rubble. Even though these gravel beaches are unforgiving to bare feet, they are a fascinating find as they hold answers to a number of questions concerning past weather conditions and sea level. Many beaches are in remote locations and challenging to access, but by law (Resolution No. 7 of 1989 to be exact) all shores and all beaches within the Virgin Islands are “vested in the Crown… and there is always free access from any part of the waters to all shores and beaches…” 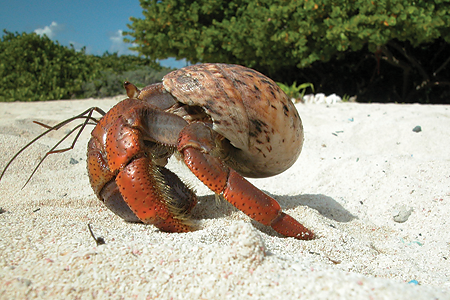 A very general definition of a “beach” is the transitional zone between the low water mark along a body of water and landward where a definite change takes place such as the vegetation line. Other schools of thought expand this definition and include a broader scale such as the marine habitats in front of a beach. Beaches are found along the ocean, lakes, even ponds and sediments that accumulate in this zone originate from the water or land. Seaward, currents and waves deposit marine particles such as mollusks, foraminifera (tiny marine animals with shells) and coral. From the land, sediments primarily come from rock (igneous, sedimentary and/or metamorphic) via rivers and valleys. However, not all beaches are sandy.   Beaches may be classified by grain size and may be made of “gravel” such as coral rubble, cobbles and even boulders.

In the BVI, the beaches were formed over the last 6000 years, after the last ice age ended and sea level rose to roughly where it is today. Wind and waves helped to shape the beaches by either eroding or accreting different types of sediments. Through time, a number of features began to form, many of which can be seen today but most people probably wouldn’t  pay much notice to, such as beachrock found on erosional beaches. Beachrock are the ledges of rock found between the low and high water marks consisting of sand grains cemented by calcium carbonate. They are formed by chemical processes. In some areas, beachrock can be seen further offshore, indicating a time when the sea level was lower. In other areas, where it is within the tidal zone, tidal pools have formed and a variety of echinoderms and mollusks can be found. 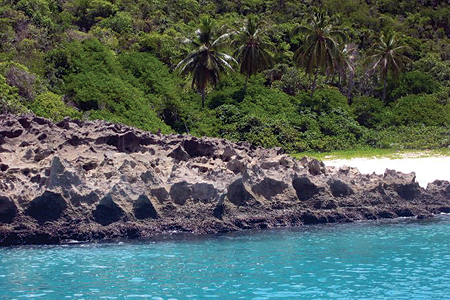 Over the past 6000 years, the beaches have not only been formed and shaped, but wildlife such as sea turtles have adapted to the changes and continue today to be a part of this complex ecosystem. So the next time you are sitting on one of the beaches sipping rum punch, take a good close look at what is on or around the beach. Chances are it has been around for thousands of years and you’ll find a lot more than just a bunch of sand.