ComeAwaySmiling – What’s the ideal size of boat for a cruising couple? It used to be in the mid-30-feet range but as the desire for comfort has increased, along with the load capacity of sheet winches and the reliability of electronics, 40 feet now seems to be the entry level. 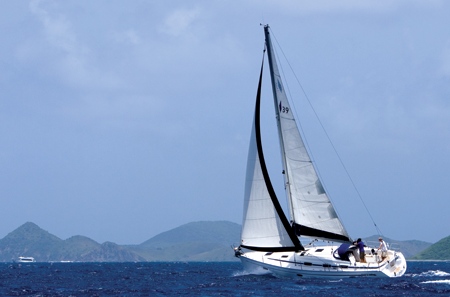 At that size it’s possible to include three cabins, a couple of heads, a decent stove and refrigeration unit, a sizeable chart table and sufficient storage to keep body and soul together for a month or two at a time. It’s a well-worn path, leading to the adage that 40 is the new 36. It’s not all about feet and length, though, it’s really about pounds and displacement. Whereas the 36-footer might displace somewhere around 12,000 lbs, the new 40-footer weighs in at about 50% more, 18,000 lbs or so. This extra displacement results in added comfort, better sea-keeping ability and more all-round load-carrying capacity.

The most familiar iteration of this size of cruiser is the ubiquitous charter yacht, usually of French provenance, with acres of glaring white inside and out and, while efficient at its task, it lacks a certain je ne c’est quois. Style, perhaps? What often seems lacking is a feeling of craftsmanship or completion. Those extra touches of wood trim, or an added locker or two, something to make one feel that behind it all lies a caring soul, or at least one with an eye for detail. 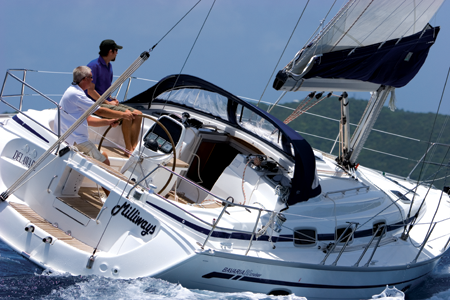 These thoughts came to mind when recently, courtesy of Horizon Yacht Sales, I had the pleasure of sailing the new Bavaria 39, a triumph of German nautical engineering and Slovenian design. While breaking no new ground in terms of layout or architecture, the Bavaria is a joy to sail—easy to set up, responsive to the helm, steady on her feet. With an optional deep keel of 6’7”, our test boat stood up to a 22-knot breeze in the Sir Francis Drake Channel, driving through the swell at up to six knots with a minimum of fuss. Staying in the groove with full sail set and just a little traveller to drive her along, she did everything asked of her with grace and ease. Later, reaching back to base at Nanny Cay, she made the same speed with the wind at 120 degrees apparent.

Now none of these numbers are important in themselves. Most modern cruising boats should be able to match them. But an equally meaningful test of a cruising boat is not so much how she is under sail, important as that is, but how she is at rest. On this score, the Bavaria 39 has many advantages. 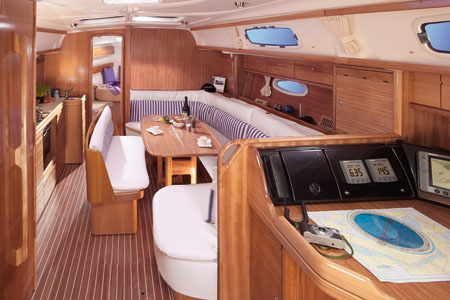 Designed by the same architects, J + J Design, who have crafted the Bavaria range since the early 1990s, the 39 is distinguished by an interior featuring acres of mahogany-coloured wood panelling and faux-wood trim. The light-toned panelling imparts a warmth to the interior that makes it feel more relaxing and secure. One innovation in the Bavaria 39 is a row of lockers running the full length of the boat at around shoulder height, attached below the side decks. These lockers, with their strongly hinged doors, create a formidable amount of stowage space in an area commonly neglected by other manufacturers. Handholds abound, essentials on any boat but too often considered an afterthought.

Some of the details that stand out as notable include the hatch opening at the top of the companionway. Two stainless steel plates with stainless grab handles form the sides of this entry way, making a secure passageway. The entry hatch space itself is smaller than on many other boats of this size, another feature bolstering the Bavaria’s offshore credentials. Galley space is more than adequate, with the stove, refrigeration and sinks spread out along port side. The inboard seat at the dining table is situated so the cook has something to brace against in a seaway, while the dining table itself is sturdy and has room for eight. An additional feature of note is the kevlar reinforcing in the bow sections to protect against impact and increase puncture resistance.

The interior layout is a variant of the standard three-cabin cruising configuration. The forward cabin features a surprisingly large V-berth with excellent access, an upholstered seat, a good amount of closet space and an abundance of shelving. The head is situated on starboard side and is sized appropriately—the door opens wide and there is ample room to shower comfortably.

Inside the salon, with its cozy, wooden panelling, the dining table is starboard side, with comfortably upholstered U-shaped seating. An additional seat is affixed to the cabin sole close to the boat’s centreline. Aft of the dining table on starboard is the nav. station with an array of storage options. Portside lies the galley, with a two-burner propane stove and oven, 12-volt refrigeration and twin sinks lying athwartships. A pair of double cabins lie either side of the engine compartment, access to which is by way of a very sturdy wooden companionway step which is supported by a hydraulic piston. There is an enormous amount of working space above and around the 40-HP Volvo, almost as if the builder expected somebody to need to work on the engine someday, perhaps to change the oil or inspect filters. A radical approach!

The Volvo engine powers a saildrive unit, which might be the only real point of criticism I would make about the boat. Saildrives have many advantages, chief among them being that the propeller is set further forward of the rudder than on a conventional, shaft-drive arrangement, thus providing much better steering response. The difficulty with the saildrive is that it can be difficult, if not near impossible, to access the linkages connecting the engine/transmission/drive unit without pulling the engine. This could be a concern offshore should there be a collision with a hard object, a fishing net or some other obstruction. Also, unless a folding propeller is fitted, the fixed propeller is generally left to freewheel rather than having the transmission locked in reverse gear, the common practice when under sail. The freewheeling prop creates more drag and can put out quite a racket as the assembly revolves. The saildrive unit also requires a rather large opening in the hull, another potential problem.

Overall, though, the Bavaria 39 is a real winner. From the thoughtful nature of the design—handholds where they ought to be, no excessive open space below where a body might launch into flight in a turbulent seaway, strong hand rails at the top of the companionway hatch, the rows of lockers set beneath the side decks all around the boat and much more—to the excellence of the boat’s performance under sail and power, there are few family cruising boats to match it. 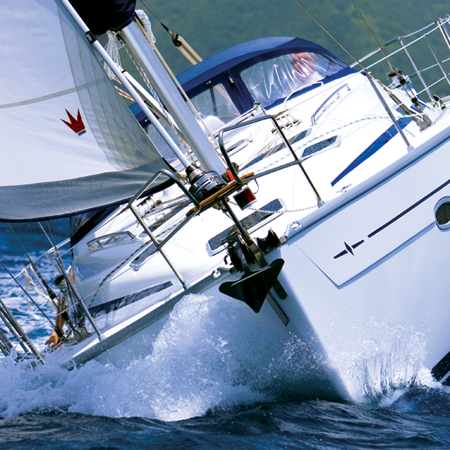