Home >> Ask and You Shall Receive:

Ask and You Shall Receive:

RELYING ON THE KINDNESS OF STRANGERS 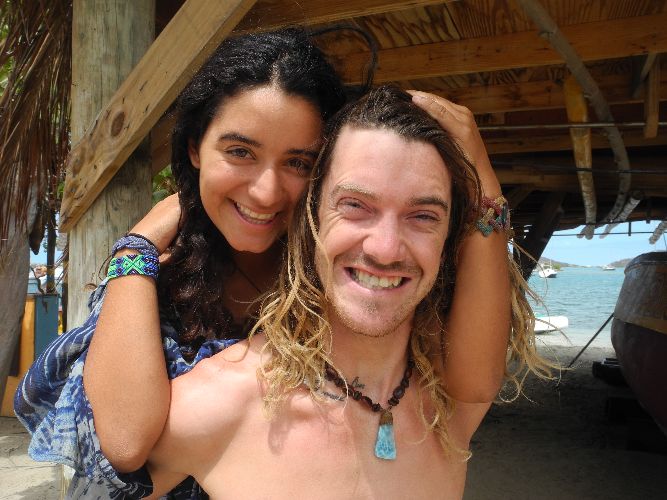 Cruising yachtsmen generally pride themselves on being rational—seamanlike—controlling risk and preparing for worst-case outcomes. Not surprisingly, a lot of this careful planning requires a bulging wallet—Epirbs and GPS devices don’t come cheap. Then there are the storm sails and the foul-weather gear and all kinds of safety equipment. Many a sailor has found him- or herself stuck to a dock preparing for the distant day when lines are to be cast off, the longheld dream put into reality. Then there are people like Moon Matheu and Ben Pike. 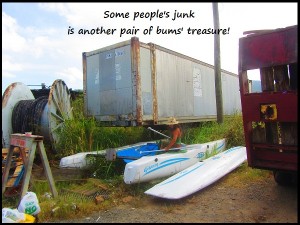 This enterprising couple decided to go in a different direction and to build a boat from other people’s junk. Starting with an old beach cat they found in Road Town and which had originally come from Sir Richard Branson’s Necker Island.

Naming the boat Dick Brano in his honour, Ben and Moon dragged the hulls of the Hobie cat to St Martin behind a friend’s boat. There, camping on a beach, they met some local kids who introduced them to their parents.

These new friends fed Ben and Moon and provided the fittings and sails their fledgling vessel would need to sail the Caribbean all the way to Venezuela. “We’re in love with meeting people,” Guatemalan-born Moon told me recently. “All sorts of people helped us to make our dream a reality.”

Leaving St. Martin with a few bags and chests stowed on DickBrano, the intrepid couple sailed south with nothing more than a compass and a cruising guide, circa 1990. “We would just sail all day and one of us would point and say ‘There’s land over there,’” Moon told me. The boat was easily dragged up on a beach and the tent pitched for the night. 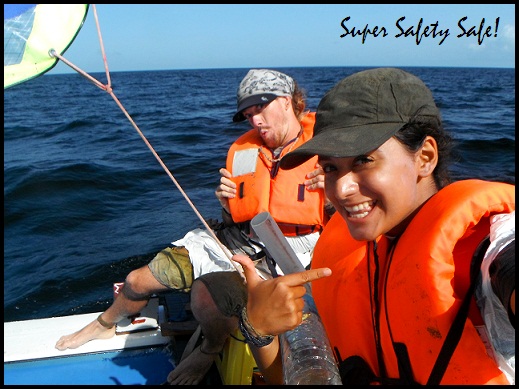 Looking at the instructions for Montserrat, “the guide said ‘Go to Plymouth’”, Ben said. “So we did.” Unfortunately, rather than finding a bustling capital city, as described in their guidebook, they found an eerily deserted landscape, the result of the devastating eruption in 1995.

“We ended up camping in the Red Zone, which was amazing, with the whole place shaking and rumbling from the volcano,” Moon remembered.

Whilst they had registered the beach cat via the UK’s Small Ships Registry, the paperwork hadn’t arrived in St Martin in time for their departure. “We just wrote Moon’s mum’s birthdate as the registration number.

Everyone just stamped the documents and sent us on our way,” laughed Ben. “A four-meter yacht doesn’t add up, does it?”

After a mishap in Guadeloupe wherein the boat rolled and all their gear got lost or damaged—a drybag with their computers and other valuable gear took on water and the electronics were soaked and no longer operable— Ben and Moon dragged everything up on the beach to begin rebuilding.

“We did the whole trip based on people’s generosity,” Ben said. “We didn’t have any money and we didn’t speak French, so things were different in Guadeloupe. We couldn’t explain what we were doing or what we needed.” He thinks there must have been a newspaper report or something similar. “Soon, people just started showing up and bringing us stuff.” Moon remembers that “Everyone was either really angry at us or really happy for us.

Either way, they came and helped. People just showed up with material and fixed the boat.” She said the most commonly donated items were life jackets.

“Ignorance is bliss,” Moon now says. “We had no idea what we were doing, but we ask people for help and they give it to us. People sometimes think we are hippies and we just bum our way around the world, but we work really hard at it. We care about the environment and we don’t drink or smoke and we take care of ourselves. Ben is from the U.K. and I’m from Guatemala. We’re both so different and still we succeed. Our journey has inspired others to go and have their own adventures.”

Their next objective? Driving a dune buggy across Europe and through Russia. “We want to visit every country in Europe,” Ben says. I’m sure that they will.

The one thing still left to do is to meet Richard Branson. “We named Dick Brano after him in gratitude,” says Ben, “and we’d like to thank him in person.” At the moment, the couple’s jewelry and woven footwear and other art pieces are featured at Aragorn’s Studio in Trellis Bay.

The adventure is documented in their blog: dickbrano.blogspot.com