Home >> All Powered Up

LADIES AND GENTLEMAN, START YOUR ENGINES –  In the BVI, sailing capital of the world, there is very little talk about power boating. That’s something those other people do. Or it’s something one has to do for work. But real boating involves enormous amounts of skill, mastery of at least 100 words of incomprehensible meaning and shades of subtlety, and lots of huffing and puffing about number 4 jibs and trysails and the like. Sailing is basically a sport of one-upmanship where, if one isn’t actually in possession of the maximum number of skills, one can always quote Adlard Coles or the Pardeys to good effect. 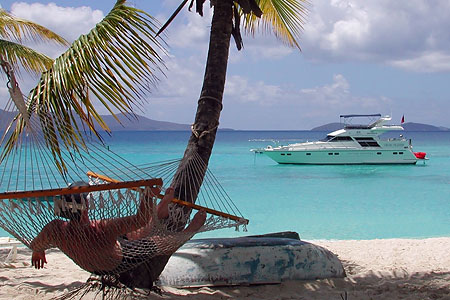 It is indeed true that sailors have produced a great number of interesting books but, a cynic might say, they had all that downtime to write them in. Power boaters don’t seem the literary sort. Nobody has written a book about driving a boat across a lake, or across an ocean, as many a sailor seems to have done. Well, Jonathan Raban did write a wonderful book, Old Glory, about taking a 16-foot motor boat down the Mississippi—but that’s the exception proving the rule.

All talk of the superiority of the sailor over the power boater ceases, though, when one of the sailing ilk attempts to move his vessel off a dock or out of a slip, or better yet, to attempt to back his boat onto a dock or into a slip. There, where true boat handling is required, is where many a Sunday sailor comes to ruin. And, of course, when a sailboat gets in trouble it’s usually a power boat that shows up to render assistance.

All this competitiveness and finger pointing is of course moot when one considers that power boats outsell sailboats by a factor of about a gazillion to one. There are legions of power boats out there, though that figure includes many a bathtub with an outboard jammed on the rear. Still, it’s no contest. And, as the boating demographic grows older, the ratio gets even more uneven. With the big charter companies getting involved in power boat cruising, it’s obvious there’s a kind of sea change under way. In order to get a sense of what is happening in the power boat world we looked at several companies and their changing involvement.

One obvious change has been at Offshore Sailing School, a venerable and long-term presence in the BVI. As Michael Domican, Offshore’s BVI director, put it to BVIYG, the school has “been in the BVI since the 1970s and since then, the recreational yachting business has changed profoundly so we’ve had to change with it. Now, with inquiries from customers who want to learn how to handle large powerboats and the need on the part of charterers to have properly qualified guests, we’ve begun teaching powerboat skills using the same techniques that have worked so well for us on the sailing side.” At the end of a week-long, Liveaboard course, graduating students receive US Cruising Power Boat Certification and, according to Domican, “the confidence to return to the BVI as skipper of their own power yacht vacation.” To more appropriately brand the power side of the business, Offshore have reorganized themselves as Colgate Schools (after founders, Steve and Doris Colgate) with two divisions: the flagship Offshore Sailing School and the new Power Cruise School. 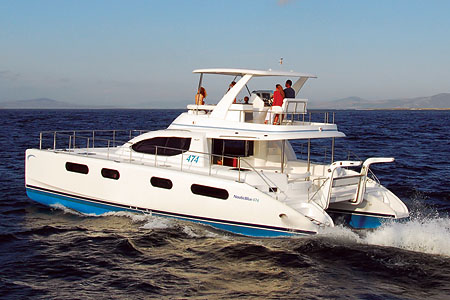 Antony Wighting, of Nautic Blue, the charter sibling to the Moorings, points out that “in the US there are seven times more power boat owners than there are sailboat owners so potentially there are seven times more customers to tap. The two brands, Moorings and Nautic Blue, are working well together, he says, “in that some of our older Moorings customers are switching to power boating because they’re a little bit tired of pulling up the sails.” Accordingly, Wighting says, Nautic Blue have built a new charter yacht specifically for the power boat customer: “the Power 474, which is a hybrid of cruising vs. speed. It’s being plugged as an SUV, because it’s so versatile. It’s a massive platform for vacationing whether it be families or groups wishing to party. There’s a lot of space with excellent fuel economy and a very comfortable layout with a speed of about 18 knots.” So guests will be able to zoom up to Anegada and back in a day.

Probably the best known name in BVI power boating is Virgin Traders. As power boat specialists they have been at the forefront of power charters for years. With a fleet comprising over 6 different model types, Virgin Traders has a good grasp of the market and what type of vessel their customer demands. James Burgess, who along with Will Driver owns the company, claimed in a communication with BVIYG that it “is on the brink of a further and major surge in product expansion over the next 18 months.” With a fleet “currently of 20 late model Motor Yachts all in superb condition,” he said, “this will be augmented by equipment rotation to whole new product lines shortly and Virgin Traders will again raise the bar for Motor Yacht Charter in the Caribbean.”

Alluding to the recent challenges the charter industry has had to face, he said that “sales are finally recovering from 9/11. It has not been easy in the post-event years to rebuild visitor numbers for several reasons, but we seem to have done it now.”

Burgess said he feels that “the BVI Government has been extremely patient and supportive and this obviously makes the task of running what is after all a fairly complicated and demanding business easier. Cruising here in the BVI and immediate islands remains a wonderful experience in what is a beautiful part of the world,” he said, “long may this continue.”

How this new-found mobility will affect the already burdened BVI infrastructure is anybody’s guess. One certainty, though, is that there is plenty of room for niche players. One such is Island Time Ltd., who rent out large RIBs and mid-size conventional-hull runabouts. Island Time’s fleet of 22- and 24-foot Contenders is aimed at the land-based tourist who wants to take in some sights while here. With a passenger limit of 6 or 7 people, there’s a lot they can do in a day.

Island Time also rent out larger inflatables. Their 15-foot RIBs with centre console and 60HP motor are aimed at the charter customer who wants to add an alternative to the usual boat tender—one that is roomier, more comfortable, and offers a turn of speed that can open up many more options such as heading off to a dive site while the rest of the crew go lollygagging on the beach.

Will the power boat market continue its rapid expansion to levels such as are seen in, say the USVI? Much of the charter market there is for day-trippers who want fast and comfortable cruisers, many of whom appear in BVI waters where they can see the major sights and be back in Red Hook by nightfall. How much will rising fuel prices affect the market’s growth? Nautic Blue’s Antony Wighting stressed the fuel economy of the new Power 474, and said “Anything is possible—we have the expertise and we have the boat builders behind us, so we are only limited by ourselves. We’ve always tried to be ahead of what the customer needs prior to them asking for it. Do we have any plans right now for producing an electric power boat? No. Does that mean it’s out of the question? No.”

As Michael Domican of Offshore Sailing School points out, “For much the same reasons that it is the world’s best location for sailing bareboaters, the BVI is a very desirable destination for powerboaters. After all, closely-spaced islands, warm, clear waters, tropical palms and cooling breezes aren’t attractive to just the wind powered set.” He also pointed out that this is not just a local phenomenon, and that “while Offshore provides sailing courses certified by US SAILING, Colgate’s Power Cruise School trains to the standards of US POWERBOATING which, in yet another sign of the shift toward power, is the newly formed power branch of the national governing body of the sport of sailing in the United States.”

As the power boat market increases, there will be new challenges for the BVI—storing and dispensing fuel will become more of an issue and, with higher speeds, there are bound to be more disputes between boaters. Still, it’s what the market wants and, generally speaking, what the market wants, the market gets.