A foxy catch – Kevin Grey, the coordinator for Ocean Fox Fishing, one of the major lobster catching enterprises in the BVI, is a grizzled 35-year veteran of the fishing industry.  Ocean Fox is a vessel licenced by the BVI authorities to catch lobster throughout the Territory.

The Fox in Ocean Fox is a certain Foxy.  That Foxy who, Kevin Green tells me, as a boy used to go and fish and catch lobster.  “Way back, there weren’t many restaurants and Foxy used to catch so much lobster he couldn’t give it away, in fact he used it as bait to catch other fish, but he always gave it to his friends and those that were appreciative of his efforts.” 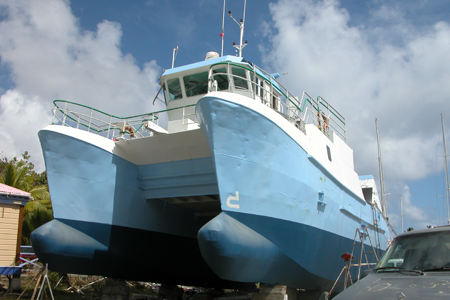 Little now has changed, Ocean Fox is dedicated to its environment and supplies a relatively fixed market; several restaurants benefit from the catch, each taking about 100 pounds.  Over the course of a 3-day, 13-hour-a-day run, catches average between 250-500lbs of prime adult lobster.  Juveniles and pregnant females are required to be thrown back into the sea, with information of throw backs and catches given to the BVI Conservation and Fisheries Department to help create an estimate of the lobster harvest in the BVI.  Traps are made of natural fibres that will start to degenerate and collapse within 3-4 weeks if still in the saltwater; in effect, if they are not brought up it’s the lobsters’ lucky day.  In the BVI, only commercial fishermen are allowed to fish for lobster.  Laws are strict, stating that each catch must be recorded and every vessel must be appropriately licenced.  Commercial fishing licences are reserved for citizens of the BVI.

It is still an evolving trade: a private enterprise at a vast cost.  Traps are set off shelves where debris will sink to the bottom to be lobster food.  Ocean Fox does not mark its traps on the surface—they are kept secret, to confuse poachers.  The penalty for illegal lobster fishing or poaching is the impounding of the vessel involved.  This is a deterrent for foreign vessels with malicious intensions of exporting lobsters illegally. With the help of the Crown management Service, local lobster fishers, and Conservation and Fisheries, any foreign vessel caught lobster trapping will be dealt with appropriately.

The demand is high but due to the overheads of deep sea trapping and the exhausting work, the supply is limited.  Maintaining the status quo and ensuring the longevity of the lobster stocks is important to Ocean Fox and its counterparts.

After my interview with Kevin Grey, I find myself in front of a $40 plate of lobster.  Grey, the hardened veteran, taps me on the shoulder and whispers, “That wasn’t easy, boy, but it’s worth it, isn’t it?”