Home >> A Classic for Cruising

A Classic for Cruising

A CLASSIC FOR CRUISING – Beats there a seafaring heart that doesn’t love a schooner? There is something salty and purposeful about the rig. defined by the use of fore and aft sails on two or more masts. The more familiar ketch rig is sometimes referred to as a back-to-front schooner, but the latter has a more pleasing symmetry. 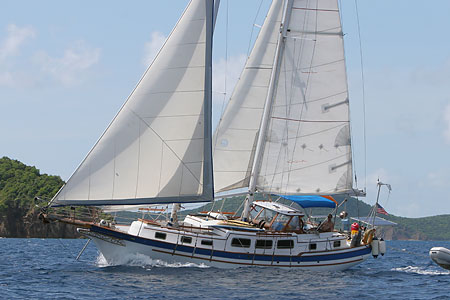 Conceived as a rig for working boats, the schooner became very popular in the early years of the United States where the need for speed made it ideal for fishing boats and coastal traders. In fact, some schooners, such as Canada’s 1920s-era Bluenose, lived double lives. Bluenose made a reputation as a successful racing boat while also earning her keep as a highly productive fishing vessel working the grounds of the Grand Banks.All that is long gone, of course, and the subject of occasional barroom chit-chat. But it’s not all nostalgia and moist eyes—there are schooners sailing still and they often live very productive lives in the charter trade or carrying intrepid types around the globe.

I recently had occasion to visit such a lovely wee ship, the 45-foot Seafari IV, which lies to a mooring in Tortola. As we approached in the dinghy, I was taken with her fine proportions—so many smaller multiple-masted vessels seem top heavy, or else too short for their deck housing. But Seafari looked lovely, with her clipper bow and bowsprit, rows of belaying pins racked to her shrouds. This is a serious cruiser.

Her owner, who has raced her successfully as well as voyaging to and from the Chesapeake, is looking for a smaller boat now that the kids are in college. Or else a bigger one, he’s not sure. I suspect his confusion is brought on by the prospect of having to live without this lovely ship.

Built in 1979 in California by Down East Yachts, she is of solid fibreglassfrom an era when fibreglass boats were relatively bullet-proof in contrast to contemporary builds. Fitted out with all the classic boat accoutrements such as mainsail boom gallows and self-tending staysail and fore-boom, Seafari boasts a bath tub in the aft stateroom. Can’t beat that.

Rigged as a staysail schooner, Seafari sports seven sails in her sail wardrobe, including a fisherman staysail and a gollywobbler.  The masts were pulled from the boat in 2004 and she was extensively re-rigged, including the replacement of most of her chainplates. This is not a project boat but a ready-to-go cruiser.

How fit is she for cruising? Her layout below is well thought out: the forward cabin has a sleeping arrangement that can be configured as either a double or two separate single berths. As singles, the two berths are on different levels. This arrangement is repeated in the second forward cabin which shares a head and shower. The salon has a dining table that can be dropped to make a full double bed, while the settee folds into a double as well or can serve as a sea berth. The aft stateroom features a king-size bed with en-suite head and shower featuring the three-quarter sized bathtub. Handholds are abundant throughout and there are few wide-open areas other than the salon.

Storage is of the essence in a cruising or charter boat and Seafari shines on that front. Most of the panels in the cabin sole open to reveal deep storage areas with room for toolboxes, spares and the like. Library space for over 100 volumes is claimed. Tankage comprises 250 gallons of fuel in two aluminum tanks, 300 gallons of fresh water in two stainless tanks, and a 100-gallon aluminum holding tank.

Perhaps of greatest importance to many cruisers, Seafari is set up to be electrically independent of her engines. With an Air Marine wind generator and a total of about 200 watts of solar panel, she can provide for all her electrical requirements, including refrigeration, without running engines. The owner reports having gone for three months without running the engines for charging purposes.

Above decks the steering position is in a raised cockpit which is roomy but well-sized for sea. Sightlines are above reproach. Electronic instruments include all the necessaries as well as a Raytheon 24-mile radar, installed in 2004, and in Icom SSB radio. The autopilot is an Autohelm 7000, rebuilt in 2004.

Is everything about Seafari IV above reproach? Well, of course not. She’s almost 30 years old and shows it in a few places. The work to be done is mostly cosmetic, though new upholstery for starters and some paint and polish. But for an ambitious sailor with a view to running a charter business in a yacht with oodles of character, or for a family contemplating a world cruise, this a vessel well worth consideration.

Displacing 40,000 lbs. on an overall length of 45 feet (not including the bowsprit) and a waterline of 38 feet, Seafari packs an awful lot of ship into a small package. Her 14-foot beam allows for some serious room below, while the 6-foot draught gives her master plenty of cruising options. She’s not for everybody, but for the sailor who’s looking for character and tradition in a well-equipped offshore yacht, Seafari IV is definitely in a class of her own. 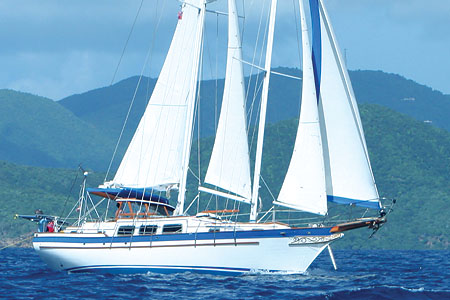