Boat shows: yes – we do have them. It is perfectly natural that the biggest charter area in the world – pro rata with visitors and boats – has its own show.  Each year BVI charter companies and brokers travel to offshore Boat Shows such as Annapolis, Southampton and Miami. 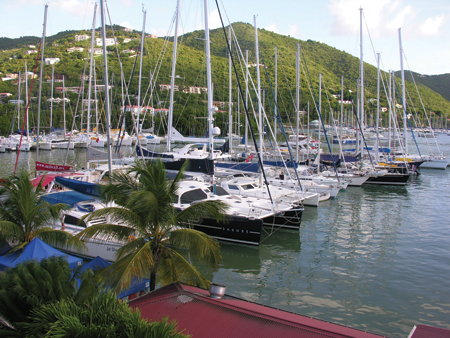 Serving as a showcase of current BVI Boats and Crews available, the show also promotes tastes and delights of the islands.  We caught up with the BVI Charter Society to find out what is in store. By the time you read this the show will be only days away on the 4th-6th November.

Gentle and steady trade winds, a myriad of islands and cays, and a host of breathtaking anchorages –  that’s the signature of the British Virgin Islands.  It is also known as “the sailing capital of the world” and the home base of a $35 million per year industry called Crewed Yacht Chartering.

For 26 years the Charter Yacht Society, a BVI non-profit for the industry has been the host of a charter yacht show providing sailors the platform to present themselves to a network of international charter yacht brokers.   This year the show is scheduled to take place again at Village Cay Marina in the heart of Road Town.

Traditionally, daylight hours are filled with formality and business as brokers visit each yacht, familiarizing themselves with the layout of the boat, its amenities and, of course, the hosts.  But don’t think for a second that’s the end all, because the parties and the food competitions between each boat's chefs are nothing to be missed. However, this is not open to everyone and the show overall is dedicated to the brokers, boats’ crew, and the networking possibilities therein and so is closed to the general public.

Although the show officially starts on the 4th, November 3rd will kick off the show for crew only at the CYS’s Annual General Meeting and crew social at the Virgin Queen.

The official opening of the show will take place on November 4th at Expo in Palm Grove Park where more than 25 BVI businesses will congregate under starlight and tents to showcase their products and services to the crews and brokers.  All show participants will have an opportunity to compete in fun activities such as cocktail blending contests, napkin folding and crew match making.

The second night will be hosted by His Excellency the Governor David Pearey and his wife Sue at the Governor’s Residence, whilst the final night’s dinner will be held at the noteworthy Oscar’s Restaurant, Frenchman’s Cay.

November 7th brokers will climb aboard a yacht of their choice for a sail on the waters of Nature's Little Secret.
From decks and docks to fun and frivolity – the Charter Yacht Society’s annual BVI boat show incorporates it all.

If you have an interest in attending or participating in the event, please contact Janet Oliver of the Charter Yacht Society on (284) 494-6017.