ITS ALL IN THE STROKE –  In 1905 Cameron Waterman Beach had a plan to stick a motorcycle engine on the back of his boat as he was tired of rowing.  A few years later, Ole Evinrude launched a range of outboards for racing.  Thus, the most competitive of all marine businesses was born. 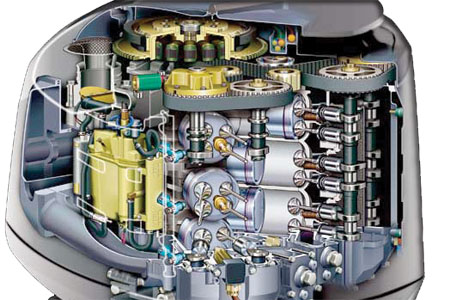 It took Mercury until the 1950s to launch a range of superior engines that were lighter and less inclined to need a brain surgeon to fix them. Mercurys could run all season with only routine maintenance required. The engines were suddenly open to people who lacked mechanical skill.

The race between the manufacturers to stay ahead was one that only benefited the customer as more powerful, lighter and more efficient engines were produced. The race continues, with Yamaha, Mercury and E-TEC producing the world’s leading engines.

The Mercury Marine OptiMax is a low-emission, direct injection outboard speedboat engine. At the heart of OptiMax is its ability to deliver a highly precise amount of fuel and air directly to the cylinder just before ignition. OptiMax is virtually smoke-free at any speed because oil is not part of the air-fuel mixture.
.
Yamaha produces the V max HPDI range of up to 300 hp. Here’s how HPDI works: Six sophisticated sensors help the microcomputer optimize ignition timing and air/fuel mixture. Fuel is drawn through the fuel pump and vapor separator, then pressurized by the twin high-speed fuel pumps – to 1,000psi in the next-generation 3.3L HPDI and 700psi for the 2.6L HPDI. Internal-opening fuel injectors distribute the fuel to each individual cylinder enhancing fuel distribution for maximum power and greater fuel economy.

The Evinrude E-TEC range of two-stroke outboards, the leading engines today, require no scheduled dealer maintenance for the first three years or 300 hours of normal recreational use. Not even gearcase lube. You’ll never have to change the oil or the oil filter, which can cost several hundred dollars each year for other technologies. E-TEC uses up to 75% less fuel than typical 2-stroke carbureted engines and up to 50% less oil than competitive direct injection engines. And you’ll use 30% less oil compared to a 4-stroke with a typical maintenance schedule under normal operating conditions.

The lightweight design of the Evinrude E-TEC increases performance and boat handling while its large displacement provides more horsepower and torque. This combination of light weight and high torque makes E-TEC accelerate faster and achieve higher top speeds than any other outboard engine in its class.

When you consider the fact that the 2-stroke Evinrude E-TEC produces a power stroke every revolution and it doesn’t have the added complexity of belts, camshafts, valves, timing chains and oil pumps that add weight and rob power and torque it’s easy to understand why 2>4.